One of the principles of modern survivalism is that everything we do to prepare for disaster should make our lives better, even if disaster never comes.  I made a good step in that direction today.

First, a little background...  I grew up in an antique car family.  When I was very young, we had a 1913 Model T and a '36 Packard.  In my teens, my folks had a '55 Chevy Bel Air, a '55 Chevy pick up, a 50-something Goggomobile (makes a Smart car look like a limo) and a '63 Mercury Comet convertible that I got to drive some.  When visiting my grandparents in Idaho, I drove around in their '49 GMC pickup.  My senior year in HS, I drove a '75 Jeep CJ5... it was only 10 years old, not an antique.  In college, I bought a Jeep CJ7 and drove it for several years before I lost it in a wreck.  I went through several more cars of various ages, but no antiques.  In '02 I bought a Jeep Wrangler... again lost to a wreck... that and the CJ7 were both black... won't try that again...  My folks had drifted away from antique cars through most of the '90s, but then got a '75 Eldorado convertible - he recently swapped that for a '69 Corvette.  Through all of this time, by older brother has made his living restoring antique cars for people.  He even had one that he did that ended up in the national museum in Hershey, PA.  On my wife's side, all of her family is in to hot rods.  They build them, drive them and show them.  My FIL even built the frame for the rod that is the National Street Rod Association's annual raffle car this year.  But I never got around to getting one.  It was always something in the back of my mind, but other things took priority.

Of course, there is also the threat of Electro Magnetic Pulse shutting down electronics from a terrorist air burst of an atomic weapon, or from a gigantic solar storm.  There are many who think that modern, computer operated cars will cease to run.  The characters in "Patriots," by Jim Rawles, all buy early model Ford Broncos or Mustangs for just such a reason.  Of course, older cars are a lot easier to work on and maintain.

Well, today I achieved both... I've got an antique car that well let us go to the local "cruise ins" with the family, and a rig that is a great first step toward an EMP BOV. 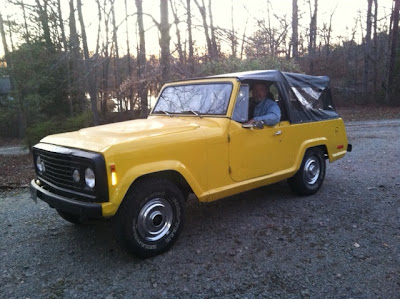 Here I am in my "new" rig.  It's a 1972 Jeep Commando.  On the BOV side, it's got four wheel drive, decent cargo space, and not a lick of electronics in the thing.  Not even a cigarette lighter or a radio.  It's got a 232ci inline 6-cylinder and a 3-speed transmission.

As an antique car, it qualifies.  Plus, I'm back into a Jeep.  I've got 1972 Virginia license plates for it, so it gets a one time registration fee from DMV, and no annual costs there, plus low cost insurance.  It's only got 36,000 miles on it and spent most of it's life on a farm without a top.  The last owner bought it a couple years ago and put some time, money and effort into cleaning it up and getting it running great.  It didn't have a top (it looks like it was a hard top originally) so I ordered a new Best Top for it and installed it today.  Next weekend, I'll put on new shocks and a steering stabilizer.  It will be an ongoing restoration project.  I never expect to do a frame-off, contest winning restoration, but it will be a good hobby, fixing it up a little bit at a time and keeping it in top notch running shape.

Over time, I'll add some emergency gear to it and make it a true BOV.  Until then, I'll sleep a little better knowing that if we do get struck by an EMP or solar storm, I'll still be able to travel and get around for a while.

Have you thought of an alternative form of transportation?