Those of you on Facebook might have seen a sneak preview of my new custom sheath that knife maker extraordinaire, Luke Swenson, made for my USMC Ka-Bar.  Well, it came in the mail today and it is even better in person.  It is incredibly well built, heavy leather, beautifully finished, and fits the knife like a glove.  And to top it all off, Luke put the If It Hits The Fan logo on it.  The sheath has M.O.L.L.E. attachment points on the back, and a similar attachment point on the front where I can add a small pouch, or wrap some cordage.  It has a very secure snapping strap to go across the hilt and hold the knife in place.  The belt loop is generously cut to fit a web belt, or slide over a pack belt.  I carried a Ka-Bar throughout my time in the Marine Corps, including all through Desert Storm, in the factory sheath.  I THOUGHT the factory sheath was just fine, and just accepted that it was kind of floppy and that I would lose the knife if the strap ever came loose.  No more!  I have now been spoiled!  If Uncle Sam got real desperate and needed a middle aged fat guy to go into combat and called me up, I would be supremely equipped with this Luke Swenson sheath carrying my trusty Ka-Bar.  I'll get a little dirt time this weekend and put it through its paces, but I am confident that it is just as functional as it is useful.  Do yourself a favor and visit Luke's website at http://www.swensonknives.com/ and check out his gallery. Hmmm, my birthday is coming up and I think something like a scaled-down "Mrs. Wolf" about 3.5-4" oal and a 3/4 - 1" width to use as a neck knife might be just the tickets, you know, if my wife is looking for something to get me? 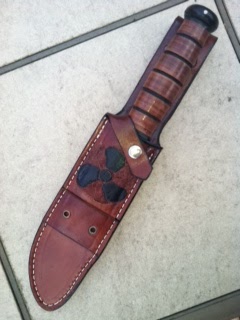 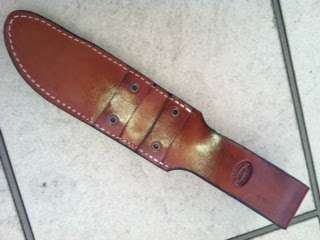 Book Review: 1491﻿
I recently read 1491 - New Revelations of the Americas Before Columbus, by Charles C. Mann.  If you are a bit of a history geek like me, it is a fascinating read.  Part college text book, part adventure novel.  Did you know that there were an estimated 100,000,000 people living in "the Americas" in 1491?  Far from being scattered bands of "noble savages," many of them lived in advanced civilizations and large cities.  Being in Virginia, of course I grew up hearing about the Eastern Woodlands Indians such as the Powhatan and Pamunkey, but I never realized that by the time John Smith met Pocahontas in Jamestown, the native populations had been destroyed by disease that spread much faster than explorers did.  When the earliest explorers came, the natives had vast areas of forest cleared for grazing bison and other game.  They would use a region for generations, then let it grow back and clear another area.  By the time Jamestown was settled in 1607, 115 years of disease had reduced them to small tribes and bands who could not maintain such infrastructure and the forests had reclaimed from the Atlantic to the Mississippi.  I also never really thought much about the Central and South American cultures that were just as advanced as the Egyptians and other ancient peoples.  I'm really looking forward to reading his next book, 1493.
FloodSax
I've recently connected with the folks from FloodSax USA.  What's FloodSax, you ask?  FloodSax are designed to take the place of the traditional sandbag in water retention efforts in the face of floods.  They weigh about a pound, and are filled with some substance that absorbs water and swells to 40-some pounds, and then becomes a water barrier.  If you live in a flood-prone area, you can have a few boxes of these on the shelf, then put them down for the flood, without needing a truckload of sand or the backbreaking labor of filling sandbags.  They are sending me some to test and review for you, and we are working up a way to have a reader contest so that you can win a kit as well.  If you happen to be going to the National Hurricane Conference in Orlando March 26-29, they will be there on the exhibitor floor in booth 329.