More Machine Guns In Virginia Than Anywhere Else?

There was a fascinating article in today's Roanoke Times that said that there are 30,000 legal machine guns in Virginia, more than any other state.  In second and third place are the far more populous Florida and California with about 28,000 each.  The article is relatively balanced, but fails to understand that the vast majority of these machine guns are owned by law enforcement agencies.  I've found the ATF's annual NFA report and will be reporting my analysis of it soon.

Tropical Storm Sandy is swirling around in the Caribbean and may cause some trouble along the East Coast next weekend and in to early November.  In a worst case scenario, it could cause some issues with the election.

It all depends on the jet stream.  If it comes in one way, it will blow Sandy out to sea.  Another way could make her skip along the coast then hitting the north east, potentially with hurricane snow.  Yet another way could hammer North Carolina and Virginia, much like Hurricane Isabel of 2003 with widespread damage and over a week of power outages.

The only thing certain is that along the East Coast, we need to pay attention to her. 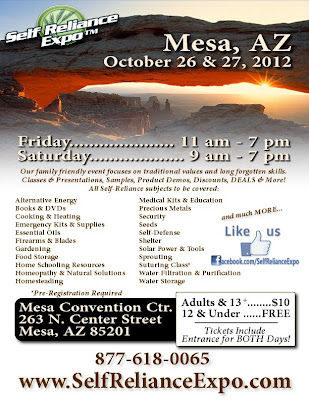 Later this week I'll be announcing a reader contest where you can win a copy of the latest prepper novel, 299 Days, by Glen Tate.