Well, yesterday was the annual Richmond Celtic Games and Highland Festival.  One of the highlights of my year when I get kilted up, smoke cigars and drink Guinness all day, and listen to bagpipes and the grunts of large men throwing things.

Yesterday there was a new vendor, Carson's Customs LLC, the business of Carson Sams.  Carson is a blacksmith out of Partlow, Va.  He had a forge, anvil and vise set up.  Most of his equipment is well over 100 years old and incredibly well built.  You can't find a vise like he used at Sears.

He had a wide range of products for sale and that he was working on there.  Grilling tools and Celtic crosses were popular with many customers, but I was drawn (no blacksmithing pun intended) to his knives and weapons.  He had some really nice hatchets made from files with shaving sharp edges.  One cool item was a three pound war hammer with about a 18-20 inch handle, and a head with four squared off prongs on the striking face and a skull penetrating spike on the other end of the head.  He also had some neat railroad spike knives.  Most of the time when you see these, they are very simply drawn out from the spike.  Carson Sams makes his with nubs and rough surfacing on the spike grip so that they are much more ornate than a typical one and have a much more aggressive grip.

The knife I got is his "Ren" knife, made from a single piece of drawn, high carbon steel.  Overall it is just under 10 inches long with about a 4 3/4" blade.  The spine width is 1/8" and the blade grind is convex or axe style.

The grip is formed by the elongated tang curving back on itself and then out again.  While it is very stylish, it is also very useful.  It can easily be held in a saber or icepick grip.  It is also ideal for choking up on with your index finger ahead of the curve and thumb up on the spine for fine or delicate work.

This thing is razor and needle sharp.  Just the slightest touch of my finger to the tip drew blood like I was doing a sugar test.

It is ideal for a field or camp knife, and could have function as a fighting knife as well.  With the high carbon content and very flat, sharp angled spine, it is great for striking a flint or fire ferro rod.  I need to make a sheath for it, but that should not be too much trouble with very basic leatherworking skills and tools.

If you are in the market for a primitive style knife, I think this one is a great choice.  Carson doesn't have a website, but you can reach him at carsonscustoms@hotmail.com. 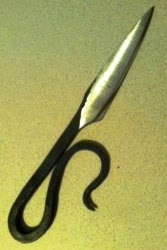